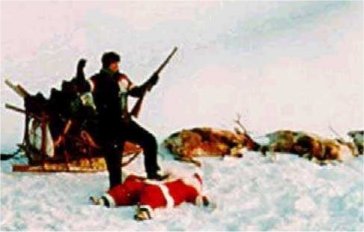 Now that Christmas is over, I can finally speak my mind on the subject. It is a hideous, reprehensible holiday that damages children and serves only the needs of our capitalist economy.

I have no objection to a holiday where people get together with family and friends. This is good, especially when people are so over-programmed that they might not do it otherwise. It is the gift-giving tradition that has become disgusting—a monster out of control.

I have nothing against gift giving, but its meaningfulness lies in its spontaneity and its free-will nature. The best gift is something that is unexpected and perfectly tailored to the person you are giving to. It is the physical equivalent of sharing a new idea or experience with them. A gift is a means of personal communication.

There is nothing discretionary about gift-giving at Christmas. Society forces you to do it. The result is gifts without joy or communication.

Children look forward to Christmas, but not with the kind of innocent, wide-eyed wonder we associate with it. Children approach Christmas with greed, pure and simple. "What am I going to get?" Parents, in turn, are forced into an endless arms race where they have to top whatever they did last year and keep up with the next-door neighbors.

A "successful" Christmas is one where no one is complaining too badly at the end of it. There is no real joy except at the moment a gift is unwrapped. The toy is used once then thrown into the child's overburdened room, where it remains untouched until eventually disposed of.

The power structure of Christmas is very disturbing. Parents give and children receive. Children don't have to do anything to receive their gift; it just comes to them because of their god-like specialness. The bigger the gift, the more it reinforces the child's position as a spoiled brat who deserves special attention just for existing. The more extravagant the Christmas, the more you are pushing the child toward eventual ruin in adulthood, where he will expect this coddled treatment to continue.

And don't get me started on that Santa Claus dude. I just don't understand: How does it benefit children to teach them this fantasy?

Parents are motivated not by the "joy of giving" but by guilt and a desperate desire to be adored. An expensive gift is a cheap shot to adoration. It is supposed to make up for all the time and attention not spent on the child.

Christmas is a drug-fix for defective families. It doesn't raise good children. It doesn't built character. It is this massive year-end distraction from the real business of child-rearing, which is to teach self-sufficiency and responsibility.

The secret, insidious purpose of Christmas is to breed consumers. It teaches children that the purpose of life is to acquire things.

Christmas is a holiday of impossible dreams and inevitable disappointment, which haunt the child into adulthood. Because Christmas is always overhyped and underfulfilled, it creates in later life the ingrained psychology of "giving gifts to oneself." Primed by Christmases of the past—disappointing or excessive—adults can spend their whole lives giving themselves presents—shiny, useless, expensive things they think they deserve. Christmas helps create a perpetual sense of entitlement. "I deserve this frivolous thing, because I have been good."

You hear this explicitly in adult advertizing: "After all you have done throughout the year, don't you deserve a Lexus?" Christmas has evolved into a capitalist tool to generate lifelong consumer demand. The whole idea of "I deserve it because I've been good" comes from the Christmas mythology.

As I see it, you never "deserve" to waste resources, even if you earned them. If you have enough extra money to buy a Lexus, then you should be using it for some service to humanity. That is supposed to be the true Christian ethos of Christmas: giving, not receiving.

Christmas, quite simply, is a money machine, created by merchants for merchants. It isn't a "children's holiday." It is a holiday for the exploitation of children. You dangle some useless bauble in front of them and seduce them into begging their parents for it. It is just another systematic method of extracting money from people who have it.

If you are a parent, the pressure of Christmas is hard to resist. Are you going to spoil your children by giving them useless gifts they didn't work for, or are you going to traumatize them by denying them Christmas altogether?

I suggest taking them away, preferably out of the country. Instead of holding your family vacation in the summer, you could have it in the winter, just happening to coincide with Dec. 25. You could do something with your kids rather than giving them something. This will probably be much more meaningful in the long run.

“Wholeheartedly believe in this philosphy!!!!! This is what I do with my two boys, ages 14 and 9, and have been doing with them for the past 5 years during the Christmas holidays. Believe me the first year is rough, but my children have acquired so much more in their travels then any tangible gift that I could have ever given them. Ulysses once said that, "Travel is an inexhaustible source of wisdom. We not only learn about new places, but also about ourselves, different customs and meeting new challenges." Great Article!!!” —Georgina Stuart 12/28/06 (rating=5)

“It's a good perspective and its leaning toward not relying on materialism, and teaching the next generation of the temporary element of materialism which the Bible clearly states in Mathew 6:19.” —Sylvie Yeghiaian, Canada 10/24/07 (rating=3)